Western Uranium & Vanadium management led a group of mine contractors, investors, potential investors, and analysts to a tour of the Sunday Complex. The group reviewed the surface uranium stockpiles, above ground infrastructure, and the power grid at the Complex.

After reviewing the geological maps that detailed mineralized drill holes, the group proceeded in buggies to various underground areas at the Sunday Complex to see the extensive underground infrastructure along with the uranium and vanadium rich chambers. 2. Entering the portal driving toward the ore bodies

Investors use rubber tired buggies to drive down one of five the declines called the West Sunday to the many chambers and rooms that contain the uranium and vanadium ore trends. Notice the high quality support infrastructure in this video. Trenton Davis describes the underground area known as the “Candy Store”. The Candy Store has seam thicknesses of about 35 feet with average grades of 4000 ppm (0.4% uranium). Mr. Davis describes other places in the Sunday Complex that have similar characteristics to the Candy Store, including one area of 65 feet of uranium ore mineralization. 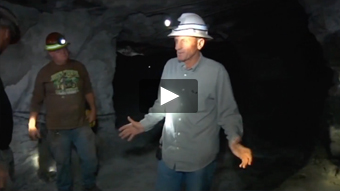